The great thing about growing older (if there is a great thing) is that we gain life experience. We survived adolescence; we made peace with our siblings and our parents and somehow managed to side step the bullies having made our way into the world.


There have been a lot of residences in my own life and a number of addresses on both land and at sea. I’d estimate at least 7 US cities, 12 ships at sea and one Caribbean nation.


That having been said the first thing I would mention is that I don’t mind having a room mate. Certainly not all room mates are the same. Guys want to bring home women (not so bad), and women want to bring home guys. One female roommate actually received calls from 21 different guys in a single day before I told her to get her own phone! On several mornings I’ve come out of my room to find a pair of pants on the sofa and they weren’t my pants! Other times you go for morning coffee and find a complete stranger wearing a house coat preparing breakfast. Clearly one must maintain an open mind. As long as they all take the trouble to clean up after themselves I’m generally a fountain of good will. Still they are strangers whose past and intent is unknown.


But when a roommate begins to have guests it changes the balance. Suddenly it is no longer a one to one living arrangement but rather two to one (even if temporarily). Suddenly there is another entire nexus of a relationship using my furniture, my dishware, my flatware... and I am disregarded. I begin to feel disenfranchised in my own home and I don’t like it. The inconvenient person, the third wheel, three’s a crowd! There are whispers and hushed tones and planning. A complete stranger is staying in my home for an unspecified time? Not that I wish to be included in their plans though it’s still annoying. I’m the one who puts a household at risk. I’m the one who runs the dishwasher and returns everything to the drawers and to the cabinets and cleans up the unseen spatters. It isn’t as though they are family? It isn’t part of the lease agreement.


This is especially troubling because all the room mates I’ve hosted lease ‘utilities included’. Their rental is a constant. It never goes up or down. So if they have a guest it’s always on my nickel. Each time a guest makes use of the appliances or showers or flushes... it’s always my nickel. I’m gratified that guests at least shower and flush though I don’t think I should be paying for their visit! I have even stated in the lease agreement that guests are ‘not permitted’ and yet that provision continues to be conveniently ignored. From time to time an overnight guest is unavoidable and I’m not so rigid as to forbid it in the absolute. This all may seem like a trivial issue to the reader but when you add together dozens of guests over 25 years it totals quite a sum!


One trouble is that room mates are not very good at participating in the household. They are quick to avail themselves of your supplies like plastic cups and freezer bags and trash bags and aluminum foil and paper towels... but they don’t contribute. They replace nothing. Roommates help themselves as though they were entitled; as if it were included as a portion of their lease agreement.


In my home we do not wear shoes. The carpet is light beige and the parking lot is littered with glass shards, tar balls, duck droppings and an entire panorama of anomalies we do not want deposited on the carpet. So we remove our shoes in the doorway.


It isn’t that difficult. Men seem to catch on a bit more quickly than women even still they often need reminding. A woman will co-operate for two maybe three visits and then seem to forget as if they were never informed. Too lazy or too lofty to remove their shoes, especially after so much effort has gone into selecting their footwear!

My current room mate has been here 4 months. The spare room smells like a locker and the vacuum cannot pass because the floor is so cluttered. I can speak with some certainty that should I leave for even a few weeks he would have the rest of my house sporting that same disarray. He would never notice that the house plants needed water and so I would return to a house filled with weeds. People often fight for a window view and yet this guy never opens the blinds to let the sunshine enter. I can manage to clean myself properly in a 5 - 7 minute shower and yet this guy needs 15 - 17 minutes. Moreover, without my presence, I believe he would have his girl friend moved in full and proper, both enjoying themselves once again on my nickel!

It’s time to look for a new roommate.

Some years past I was residing in Southern California.
It was a mixed blessing of sorts though I never tired of the exploration. California is the biggest and wealthiest state in the union but there's no place to park and they can't pay their bills!

One day I visited the small town of Laguna Beach. I suppose it's best known for the beach culture but there is very much more. I was quite taken by the 'artsy' and energetic quality of this village.

The South Coast Highway brings visitors into the town proper. It's a nice ride along the Pacific Coast.

At some point, many years past, (Eiler Larson) a homeless, rather itinerant looking WWI veteran (not unlike Gandalf and Santa combined) came to town. A Danish stranger who stationed himself on one corner (Greeters Corner) and made it his business to wave his welcoming hand to every vehicle as it entered town. 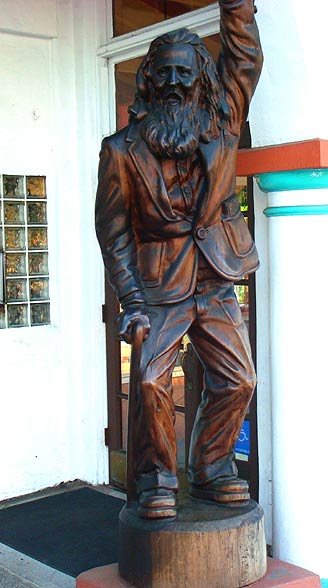 It's likely that residents were at first wary of this odd looking gent. He was scruffy. Unwashed. Poorly clothed. Heavily bearded. An undesireable. Though in time the 'Greeter' (as he was known) became a local novelty and endeared himself to many.

Local eateries began to offer meals to the 'Greeter' at the close of business. The holidays brought cash and gifts from local residents as trepidation faded and fondness grew. The 'Greeter' had become something of a local and trusted institution applauded by all and who thrived on a torrent of goodwill from the community.

A final and dignified resolution, the 'Greeter' passed away at the age of 84 in 1975 having bellowed and waved his hellos for 35 years. The community grieved. Residents would eventually commission two huge statues to celebrate what the 'Greeter' called his 'mission of friendliness'.

The towns folk labeled him the 'false' Greeter. He was basically shunned. He was reviled even though performing the same well intentioned task. I've always wondered why?
The official Greeter's appeal to the community was clearly greater than that of some disheveled vagabond. Was it merely the cult of personality? Was the greeter adopted by the community because of his uniqueness alone? Was it merely a case of being in the right place at the right time? Is the original 'Greeter' irreplaceable? Was the 'false' greeter merely a pretender? Is the community now to carry on with no iconic 'Greeter'?

It would seem that the fullness of welcome has been lost.