Sturdy, silent, safe and emission free. This variety of transportation lingers above my generation in the 'spectral promise' of future greatness such as the 'flying car' or the 'hover craft' or even the 'jet pack'. Seemingly attainable yet just beyond reach.

But what has become of electric motoring? Decades have passed and still no electric ride. Sure we have golf carts and 'segways' and 'scooters' but nothing so rigorous as to venture onto the highways of America.

We know that GM fabricated some 100 vehicles ( the EV1 ) back in the 90's. Those vehicles were test driven and marketed in California and then abruptly recalled and
destroyed ( read: crushed ) despite good reviews. The EV1 was a very handsome vehicle and in many ways more attractive than some current offerings. Only one or two survived demolition but they were disabled and are now on display in museums.

Apparently the EV1 answered a mandate to meet State of California zero emissions standards. That legislation was reversed when the Bush administration joined the fray in 2006. Petroleum companies and parts manufacturers were put off by the low maintenance requirements of an electric vehicle and feared an industry wide decline. The final determination was that there was no market for an electric vehicle.

So what is the case for an electric vehicle today?

To my knowledge not one among us can pump fuel into their gasoline tank at home. We must visit a filling station that is licensed and taxed and inspected and approved for the safe handling of hazardous materials.

The same cannot be said for an electric car. We can connect our vehicle to an outlet at home and proceed to lounge on the sofa ( or over night ) as the batteries are recharged.

But how do fueling stations engage in price competition for the sale of a commodity that is widely available at home? Electricity prices per kilowatt hour are regulated by the regional public service commission.

That brings us to time requirements. My cell phone battery is only about 2 inches square and perhaps one quarter inch thick. None the less it takes every bit of 3 hours to do a complete charge. How much time is required to charge the contingent of batteries necessary to power a vehicle? A car weighs more than a ton ( more than 2 ton to have a smooth ride ). Then you have to add bodies and all the personal gear and that makes a weightier ride. It will likely be a very long while before electric vehicles can accommodate commercial trucking.

Nearly everything on a vehicle is electric... windows, door locks, fans, audio / video, wipers, headlights, fuel and of course power steering pumps. All of that creates a great demand on battery capacity.

A fully charged vehicle has a range of 60 to 80 miles. I guess there won't be any lengthy road trips! Can you imagine pulling into a filling station only to be told that the next charging facility will be available in 2 hours knowing that it takes 3 hours to charge your vehicle? That would really knock the fun out of your day! Although it does give rise to a variety of cottage industries and a great deal more opportunity to use our other battery powered devices. At present some 'Whole Foods' locations do indeed offer recharging facilities in the parking area for electric vehicles to shoppers.

And that brings us to batteries. Certainly there is great room for improvement in every form of battery in current use. Perhaps it is little known that even the vaunted Toyota Prius ( a hybrid ) sports a hefty compliment of short lived batteries. The batteries are warranted for 3 to 5 years and then need to be replaced ( about $10,000 ). Chances are we won't be seeing a proliferation of used Prius' in the marketplace.

Tesla Motors has conceived and is now marketing an electric roadster that is very impressive. They purport that recharge time is a mere 66 mins, and also that you can achieve a distance of some 300 miles depending upon your driving habits. The faster you drive the faster your battery life is depleted. The Tesla Model S ( starting at $53000 ) is so quiet that the vehicle is equipped with external speakers to broadcast engine sounds. 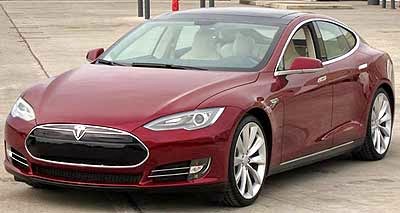 There are many challenges to continued electric motoring success. A year after I wrote this content I received an email from my friend in Australia that purports an engine has been invented that could achieve 300 miles per gallon. I sent the link to some friends who replied with the following observations:

"By the time that technology reaches us we will be paying $10 per gallon anyway."

and finally - "Don't forget that mines have been using electric vehicles for many years. Internal combustion engines would spell doom for the miners. Instead electric vehicles that can carry tons for many hours on end are utilized but the technology has never been shared."
Posted by Steve at 11:35 AM No comments: